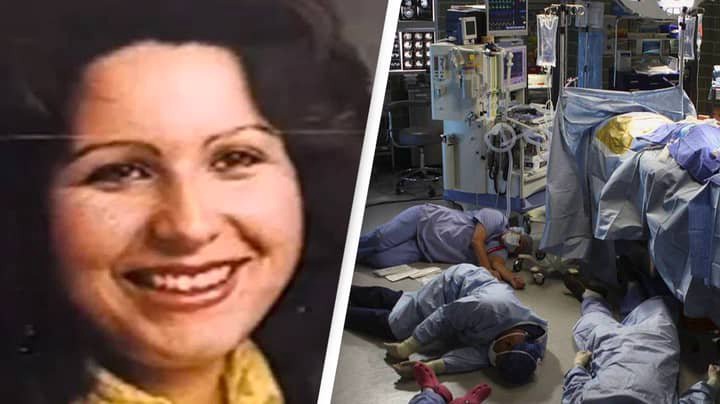 After nearly two decades, the mysterious death of the woman known as 'The Toxic Lady' remains an unsolved medical mystery.

Gloria Ramirez was given the nickname by the media when several hospital workers became ill after they were exposed to her 'crystal' blood.

And sharing the story of 31-year-old Ramirez is TikToker Rae Spirits, who delves deep into the spooky incident, which occurred way back in 1994. Take a listen below:

While battling late-stage ovarian cancer, Ramirez was rushed to Riverside General Hospital in southern California after suffering a cardiac arrest, the New York Times reported back in 1994.

Ramirez died of complications relating to her cancer shortly after arriving at the hospital.

As nurses obtained the blood samples upon her arrival, however, doctors noticed the smell of ammonia before seeing that the blood contained - what appeared to be - crystals.

"A number of medical staff began to feel sick," Spirits explains in her video.

"They were suffering from fainting, convulsions, difficulty breathing and vomiting."

A reported 23 of the 37 emergency staff on shift suffered at least one symptom while five were said to have been hospitalised.

Some staff members were in hospital for 10 days, with one person spending two weeks in intensive care.

"They evacuated the emergency room treating patients in the parking lot and Gloria passed away later that night," explains Spirits.

"The reason this happened remains highly debated. Some say it was a medical cover up and others say that it was mass hysteria."

In 1997, a research team speculated that Ramirez may have been using dimethyl sulfoxide as a homemade pain remedy for her cancer.

The treatment may have reacted with the oxygen administered by doctors to create dimethyl sulfone, which can crystallise at room temperature.

The theory suggests that electric shocks from the defibrillator could have converted it into dimethyl sulfate - a highly poisonous and corrosive gas.

Although the theory has been endorsed by the Riverside Coroner's Office, Tom DeSantis, the county's coroner spokesperson, said at the time: "There is a chance that the mystery may remain a mystery."

Scientific authors Houck and Siegel also state in their textbook that Grant's theory is 'the most scientific explanation to date'.

"Beyond this theory, no credible explanation has ever been offered for the strange case of Gloria Ramirez," they added.