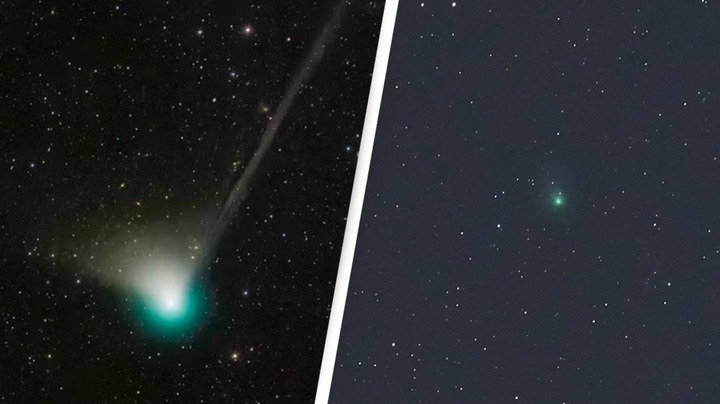 Everyone alive right now has found themselves in with the rare opportunity to spot a comet which hasn't been visible from Earth for 50,000 years.

Great job for being alive, everyone!

The object zooming over us is known as the E3 comet, or the C/2022 E3 (ZTF), if you want to get really scientific.

The last creatures on Earth which could have seen it are the Neanderthals as they roamed our planet 50,000 years ago, and now we can see what they saw as it approaches Earth.

The first comet to light up the night sky since the Neowise comet in 2020, the E3 comet is set to pass within 26 million miles of Earth on 1 February.

Now, I know what you're thinking. If the comet hasn't been visible for 50,000 years, then how do we have pictures of it? Well, the comet is already visible to people living in the Northern Hemisphere, under the right viewing conditions.

It features a blue-green coma and a gold tail; colours which have earned it the clever nickname 'the green comet', and was first discovered by the Zwicky Transient Facility (ZTF) in California in March 2021.

Astronomers have been tracking the E3 comet in the months since its discovery, and scientists at NASA have managed to snap pictures of the object as it moves through space.

It's only visible with binoculars or telescopes for now, but NASA has encouraged everyone who gets the chance to check out the comet when it passes more closely at the start of February.

In a statement about the event, the space agency said: “This comet isn’t expected to be quite the spectacle that Comet Neowise was back in 2020, but it’s still an awesome opportunity to make a personal connection with an icy visitor from the distant outer Solar System."

Astronomers have advised anyone hoping to get a glimpse of the flying body to watch the sky from a dark place, free of ambient light. Hopeful viewers are also advised to give themselves 30 minutes in the dark to allow their eyes to adjust.

The best time to see the green comet will be just before dawn, and if you're lucky, you should be able to see it without any specialist equipment when it reaches its perigee at the start of February.

NASA explains: "The brightness of comets is notoriously unpredictable, but by then C/2022 E3 (ZTF) could become only just visible to the eye in dark night skies."

Considering how long it took for the E3 comet to return to Earth after its last visit, this is definitely not an opportunity to miss!